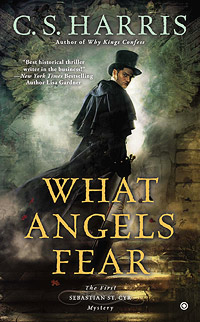 "This fresh, fast-paced historical is sure to be a hit."
—Publishers Weekly

The year is 1811. As old King George III sinks deeper into madness and the threat of social unrest and revolution haunts the privileged classes, a beautiful young woman is found raped and savagely murdered on the altar steps of an ancient parish church not far from Westminster Abbey. An ornate dueling pistol discovered tangled in the blood-soaked folds of Rachel York's cloak and the damning testimony of a witness both point to one man, Sebastian St. Cyr, Viscount Devlin, a brilliant young nobleman shattered by his experiences in the Napoleonic Wars. When a vicious attack during his arrest leaves a constable near death, Sebastian must run for his life.

Now a fugitive, Sebastian calls upon his experience as an agent during the war to embark on a desperate quest to catch a brutal killer and prove his own innocence. Ranging from the glittering ballrooms and sedate salons of Mayfair to the squalid back alleys and fetid churchyards of St. Giles, Sebastian accumulates a band of unlikely allies, including a street urchin named Tom, an opium-eating Irish doctor, and a lovely but mysterious actress who calls herself Kat Boleyn. Years ago, Kat broke Sebastian's heart. Now she may hold the key to his salvation—or doom him to destruction.

For as he plunges into a world of intrigue and espionage, Sebastian discovers that Rachel York was more than what she seemed. When the twisted path leads from a French spymaster to a Machiavellian power broker, and from there to the future Prince Regent, Sebastian begins to realize that Rachel's death holds ominous implications not only for Sebastian's own family, but for the future of the British monarchy.

Starred Review. In Regency London (circa 1811), Sebastian St. Cyr, the youngest but only surviving son of an earl, stands accused of brutally raping and murdering a young actress. Then, as he's led away by police, an accidental knifing is also attributed to him. Sebastian runs, bent on finding the real murderer and clearing his own name. Using his skills as an ex-army intelligence officer, he attempts to get to the bottom of what may be a plot by Whigs to gain control of the government before the prince becomes regent. Appealing characters, authentic historical details, and sound plotting make this an amazing debut historical. Highly recommended for all collections. A scholar of the French Revolution and 19th-century Europe, Harris is also the author of Women, Equality, and the French Revolution under the name Candice E. Proctor.
—Library Journal

Set in England in 1811, Harris's riveting debut delivers a powerful blend of political intrigue and suspense. When Sebastian Alistair St. Cyr, Viscount Devlin, is accused of the rape and murder of actress Rachel York, mistress to various members of Spencer Perceval's wobbly Tory cabinet, Sebastian goes "on the lam," in the words of young Tom, his adopted companion and faithful servant, and must spend frantic days in clever disguises chasing "across London and back." Uncanny powers of sight and hearing help him to identify several suspects, including Hugh Gordon, Rachel's fellow actor and ex-lover; shadowy French emigre Leo Pierrepoint; and even his own wayward nephew, Bayard Wilcox, who had been stalking the victim for weeks. Also implicated is portrait painter Giorgio Donatelli, for whom Rachel often posed nude, whose current patron, Lord Fairchild, is expected to be the next prime minister. Waiting in the wings to rule over this gathering chaos is dissolute Prince George (aka Prinny), soon to become regent for his incompetent father, George III. Backed by a blurb from Stephanie Barron, this fresh, fast-paced historical is sure to be a hit.
—Publishers Weekly

In 19th-century England, a dashing nobleman teams up with a jaded actress to clear his name of a murder charge. London, 1811. Naive young actress Rachel York is lured to a rendezvous at St. Matthew's of the Fields church, where she is brutally raped and murdered by an anonymous figure. Magistrate Sir Henry Lovejoy arrests handsome Sebastian St. Cyr, the Viscount Devlin, a veteran of the Napoleon Wars with a notorious reputation. Though addicted to danger and alcohol, the honorable Sebastian, haunted by war memories, is no predator. While transporting Sebastian to lockup, sniveling constable Edward Maitland accidentally stabs another officer and quickly blames it on Sebastian, multiplying the young nobleman's alleged offenses and triggering his escape. Breaking into the room of acclaimed actress Kat Boleyn, who's both his great lost love and the late Rachel's closest confidante, Sebastian enlists her help in ferreting out the truth. The pair embark on dangerous probes that uncover a cache of secrets about Rachel as well as an array of lovers and admirers. These include a fellow thespian, a wealthy Frenchman and Sebastian's brother-in-law. Meanwhile, Sebastian's distraught father tries to slow Lovejoy's manhunt by confessing to the murder himself, to little avail. But the discovery of Rachel's diary and a hidden pregnancy quicken the search for her killer. A starchy but well-appointed debut most notable for its historic detail.
—Kirkus Reviews

Off to a quick start with the gruesome near-decapitation and rape of a lovely actress, this fast-paced pre-Regency mystery effectively pits the sophisticated, overly mannered elite against the grimier lower echelons of 1811 London society. When his dueling pistol is found on the body, and the authorities seek to question him, Sebastian St. Cyr takes to the streets in disguise to clear his name. A bewildering cast of seemingly unconnected people leads to a labyrinthine set of clues connecting high-ranking politicians with a scheme to tilt the balance of power when the prince is made Regent. At every turn, Sebastian blithely escapes capture, persistently persuades his suspects to talk, and woos a reluctant mistress who hides a deadly truth. The combined elements of historical fiction, romance, and mystery in this fog-enshrouded London puzzler will appeal to fans of Anne Perry and Will Thomas. Expect to hear more from Harris' troubled but compelling antihero.
—Jennifer Baker Booklist

"Page-turning suspense, memorable characters, and an intricate chess game of a story drenched in period atmosphere."
—Tracy Grant, Author of BENEATH A SILENT MOON

"A stunning debut novel....C.S. Harris artfully re-creates the contradictory world of Regency England....Kat and Sebastian lead a cast of memorable characters you will want to meet again and again as they follow the twists and turns of the intricately woven plot."
—Victoria Thompson, author of MURDER ON LENOX HILL