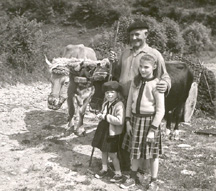 Click on the photos to see a larger version (with a few exceptions)!

Growing up in the military does strange things to children. Some become dedicated homebodies who refuse to move or even travel again; others spend their lives roaming the world, never quite feeling as if they belong anywhere. Guess which category I fit into? 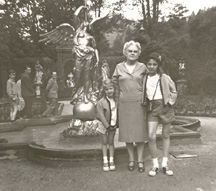 My father was in the Air Force. Back in the late fifties and early sixties, he was head of U.S. Air Force Intelligence for Spain and North Africa. That's me with my sister Penny (now the writer Penelope Williamson) and our grandmother in Heidelberg. The occasion was my dad's university graduation. After my dad retired, he went on to earn a PhD and become a professor of history. By the time we left Europe, English was my second language, and I couldn't even remember the States. The transition was, to put it mildly, traumatic.

In some ways life in the States was better than I expected, in other ways worse. I lost myself in books, from the girlpower stories of Trixie Beldon and Nancy Drew to the timeless tales of Twain and Stevenson and Kippling. I also fell in love with the mountains of Oregon and Idaho, which is where we lived. My dad was a dedicated outdoorsman, so we spent a lot of time in the woods. I enjoyed fishing and target practice, but my enthusiasm for hunting ended the first time I saw a deer shot.

I hated, hated, hated school. I was a child of the Sixties in just about every way you can imagine, and then some. My high school was so horrified when they realized I was going to be valedictorian that they refused to allow me to give the traditional speech at graduation.

I love you too, Moscow High!

At college, I studied archaeology and classics (Greek and Latin). This is me in Greece, where I attended the American School of Classical Studies in Athens.

I spent my summers on various archaeological digs, working on a Hudson Bay Company fort in San Juan Island and at Chota, onetime capital of the Cherokee

Nation in Tennessee. I also earned spare cash as an official Burial Removal Specialist, relocating graves threatened by roads, dams, parks, and similarly destructive examples of what we like to call progress. It left me with an interesting perspective on death and a firm resolve to be cremated.

on to The Roaring Twenties... Photos and text copyright Candice Proctor