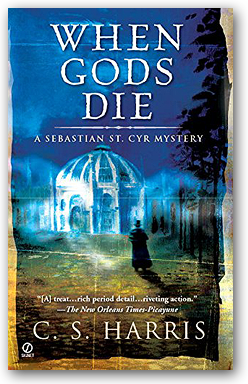 He knew she'd come to him. They always did.

His Royal Highness George, Prince of Wales and for some four months now Regent of Great Britain and Ireland, closed the cabinet door behind him and let his gaze rove over the swelling curves and exposed flesh of the woman before him. "So you've had a change of heart, have you, Madam? A reappraisal of your hasty rejection of my offer of friendship?"

She said nothing, the flickering candlelight throwing the features of her face into shadow so that he couldn't read her expression. She lay with one pale wrist curling provocatively over the gilded carving of the settee beside the fire. Most people complained about the warm temperatures at which George habitually kept his rooms, even on such a mild summer night. But this woman seemed to relish the heat, her gown slipping artfully from her shoulders, her feet bare and seductive. George licked his lips.

From the far side of the closed doors came the strains of a Bach concerto mingling with the murmur of his numerous guests' well-bred voices and, from somewhere in the distance, the faint trill of a woman's high-pitched laughter. At the sound of the laughter, George felt his stomach twist with a spasm of uncertainty.

Tonight's reception had held a special lure, for the guest of honor was none other than the dethroned French King Louis XVIII. But they came here every night, all the snide, contemptuous ladies and gentlemen of the ton. They drank his wine and ate his food and listened to his music, but he knew what they really thought of him. They were always laughing at him, calling him a buffoon. Whispering that he was as mad as his father. They thought he didn't know, but he knew. Just as he knew how they would laugh if he allowed this woman to make a fool of him again.

Why wasn't she saying anything?

Warily, George drew himself up tall, his chest swelling. "What is this, Madame? Have you lured me here simply to toy with me? To try to play me for a fool?"

He took a step toward her only to stagger, one plump hand flinging out to grasp the curving back of a nearby chair. It was his ankle, of course. The thing was always giving way beneath him like this. He could hold his wine. Better than most men half his age. Everyone said so.

The candles in the gilded wall sconces flared golden bright, then dimmed. He didn't remember sitting down. But when he opened his eyes he found himself slumped in the chair beside the fire, his chin sunk deep into the elaborate white folds of his cravat. He could feel a line of spittle trickling from one corner of his mouth. Swiping the back of his hand across his jaw, George raised his head.

She lay as before, one bare foot dangling off the edge of the settee's yellow velvet cushion, the shimmering emerald green of her gown sliding seductively from naked shoulders. But she was staring at him with wide, curiously blank eyes.

She was such a beautiful woman, Guinevere Anglessey, the gently molded curves of her half exposed breasts as white as Devonshire cream, her hair shining blue-black in the candlelight. George slid from the chair to his knees, his voice catching on a sob as he took her cold hand in his. "My lady?"

George knew a tingle of alarm. He hated scenes, and if she'd had some sort of fit there would be a hideous scene. Slipping his hands beneath her bare shoulders, he drew her up to give her a gentle shake. "Are you—oh my goodness, are you ill?" This new and even more horrifying possibility sent a shudder coursing through him. He was very susceptible to infections. "Shall I call Dr. Heberden?"

He wanted to move away from her immediately, but she lay at such an awkward angle, half on her side, that he had a hard time maneuvering her. "Here, let me make you more comfortable and I'll have someone send for—"

He broke off, his head jerking around as the double doors to the salon were thrown open. A woman's gay voice said, "Perhaps the Prince is hiding in here."

Caught with the Marquis of Anglessey's beautiful, insensible young wife clasped clumsily in his arms, George froze. Hideously conscious of his ludicrous pose, he licked his suddenly dry lips,. "She's fainted, I daresay."

Lady Jersey stood with one hand clenched around the doorknob, her cheeks going white beneath their rouge, her eyes wide and staring. "Oh my God," she said with a gasp.

The doorway filled with shrieking women and stern-faced men. He recognized his cousin, Jarvis, and Lord Hendon's murderous son, Viscount Devlin. They were all staring. It was a moment before George realized they were staring not at him but at the jeweled hilt of a dagger protruding from the Marchioness of Anglessey's bare back.

George screamed, a high-pitched, feminine scream that echoed strangely as the candles dimmed again and went out.

Return to When Gods Die