C. S. Harris talks about the Sebastian St. Cyr series, Why
Mermaids Sing, and life in New Orleans after Katrina 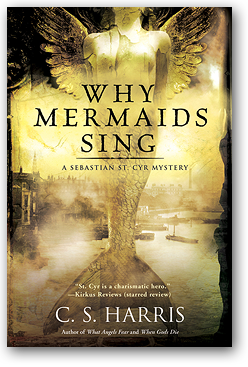 Why Mermaids Sing is such an evocative title. Where does it come from? The title was inspired by a line from a John Donne poem that plays an important role in the mystery. Someone is killing the sons of Regency England's most powerful families and leaving their partially butchered bodies with strange objects stuffed in their mouths—first a mandrake root, then a page torn from a ship's log. It's all part of the dangerous puzzle Sebastian must solve.

Tell us about the hero of your series, Sebastian St. Cyr. Sebastian is the only surviving son and heir of the Earl of Hendon. A former Army officer, he returns from the French Wars dangerously jaded and disillusioned. In the first book of the series, What Angels Fear, he is accused of raping and murdering an actress on the steps of an altar and ends up running for his life. But then something amazing happens. In the process of clearing his name Sebastian discovers that he has a flare for solving murders. More than that, he finds a new reason to live. This isn't something he does for money or because it's his job. He is driven by his compassion for the victims and by his conviction that someone has to stand up for the powerless—and stand against the powerful. Sebastian isn't naïve—he's seen too much, done too much. Yet despite it all, at heart he's still very idealistic. He believes in justice and the idea that one man can make a difference, and he's not afraid to turn over a few rocks and ruffle some important feathers in his quest for truth.

I understand that in addition to the specific murder mystery that Sebastian solves in each book, there's also another mystery that arcs through the series? There is, yes. It gradually becomes apparent that things are not exactly as they seem in Sebastian's own life. In fact, all the people in Sebastian's life--his father the Earl of Hendon, his lover Kat Boleyn, his friends, even his archenemy Lord Jarvis--have secrets. Some they know about, others are nasty surprises waiting to derail them. It makes the series more fun to write and—I hope—more fun to read.

Why did you choose to make your hero an aristocrat instead of, say, a Bow Street Runner or a magistrate? Regency England was a very hierarchical society, and I wanted a main character who could move easily through all levels of life in London. As an aristocrat, Sebastian can go places denied an ordinary constable or magistrate. He can attend the assemblies at Almack's or drop into a gentlemen's club as an equal, yet because of his unusual background in the Army he can also plunge into other areas of London—the docks, the brothels, the slums. This gives readers a chance to explore places like the Billingsgate fishmarket or the underground world of the toggers that they don't encounter as often. I'm fascinated by the old idea of six degrees of separation: whether the murder victim is a countess or a prostitute, the suspects can range from a common thief to the Prince of Wales.

When you talk about Sebastian's "unusual background in the Army," exactly what do you mean? Sebastian was an intelligence officer, a part of the British secret service that developed after 1792 and from which the modern secret service has evolved. He would more accurately be called an "action agent" than a "spy," but that's not a term most people are familiar with. Sebastian's activities in the war mean he has experience using disguises and dealing with unsavory characters. He's educated and sophisticated, but dangerous—someone once described him Mr. Darcy with a James Bond edge.

I understand you have "spies" in your own family. Did that influence the development of Sebastian? Undoubtedly! My father was an intelligence officer, and my husband spent more than two decades in Army intelligence. He's not only a great source of information on things such as exactly how spymasters run agents, but he's also useful to have around when it comes to plotting out fight scenes.

You've spent more than half your life abroad. Can you talk about that? When I was a kid, my father was head of U.S. Air Force Intelligence for Spain and North Africa. I grew up loving Europe and traveling. In my twenties, I lived in Greece and France, and I also spent a lot of time in England. I worked for the Winchester Rescue Archaeological Unit (before I switched to history, I was an archaeologist), and I have a stepdaughter who is English, so even though I no longer live there I still go there often. Most recently, I spent many years in Adelaide, Australia—a city I really, really love. And I lived in the Middle East for years. My master's degree actually focused on Middle Eastern history.

You say in your acknowledgements that you wrote this book while a Katrina refugee. How badly did the storm affect you? We managed to evacuate to Baton Rouge shortly before the hurricane hit, but our house took in enough water to ruin almost everything on the ground floor, and we also lost a big chunk of the roof. In retrospect, it might have been wiser to simply demolish the place and start all over, but we just pitched in and rebuilt. We did most of the work ourselves because construction crews were even harder to get than sheetrock and kitchen cabinets! We're still putting the finishing touches on our house, but we are back home now. We're proud to be a part of rebuilding New Orleans. This is a great city full of incredible people, and Why Mermaids Sing is dedicated to them.

Return to Why Mermaids Sing