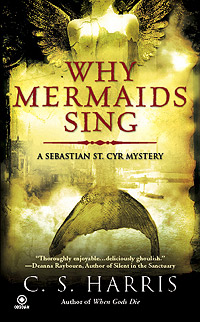 It's September 1811. Death stalks the sons of Regency England's most powerful families. Partially butchered, with strange objects stuffed in their mouths, the bodies are found dumped in public places at dawn. When the grisly remains of the eldest son of Alfred, Lord Stanton, are discovered in Old Palace Yard beside the House of Lords, local magistrate Sir Henry Lovejoy turns to Sebastian St. Cyr, Viscount Devlin, for help.

Ranging from the gritty world of London's docks to the luxurious drawing rooms of Mayfair, Sebastian confronts his most puzzling—and disturbing—case yet. With the help of his trusted allies—his young servant Tom, the Irish doctor Paul Gibson, and his lover Kat Boleyn—Sebastian struggles to decipher a cryptic set of clues that links the scion of a banking family and a lord's heir to the son of a humble Kentish vicar. For as one death follows another, Sebastian comes to believe that the murderer has both a method and a purpose to his ritualized killings, and that the key to it all may lie in the enigmatic stanzas of a haunting poem...and in a secret so dangerous that men are willing to sacrifice their own children to keep the truth from becoming known.

Check out the readers guide.

TRAILER FOR WHY MERMAIDS SING:

Starred review. Someone is brutally murdering the sons of the wealthy and aristocratic families of Regency London. Sebastian St. Cyr (When Gods Die) is asked to unveil the perpetrator but does not realize that the case has its roots in the past and that his investigation will impact his personal life. Harris captures the Regency era beautifully while providing the reader with a flawlessly constructed mystery. Highly recommended for all mystery collections. Harris lives in New Orleans.
—Library Journal

While appending a serial killer plot line to a historical setting is nothing new, Harris imbues what could be an overdone and tired narrative device with refreshing novelty, making his third Regency-era whodunit (after 2006's When Gods Die) a triumph. Sebastian St. Cyr, an unconventional nobleman with a talent for detection, is called in by Westminster chief magistrate Sir Henry Lovejoy after two scions of the upper classes are found butchered and left on public display. St. Cyr soon finds a connection between the killer's calling card and a John Donne poem. As shadowy figures threaten and the parents of the victims display an inappropriate hostility to his efforts, the sleuth doggedly persists, uncovering a secret with shocking repercussions for London's upper class. Neatly meshing the page-turning whodunit plot with major developments in St. Cyr's love life, Harris shows every indication of assuming the mantle of the late Bruce Alexander as a reliable producer of quality period mysteries. (Nov.)
—Publishers Weekly

Warning! This review contains many spoilers!
Aristocratic Regency detective Sebastian St. Cyr, Viscount Devlin, solves a series of grisly murders.
When yet another son of a wealthy, well-connected family is found slaughtered with an object stuffed in his mouth, magistrate Sir Henry Lovejoy, knowing that any sleuth must have entree to the highest reaches of society, begs Devlin for help. Curiously, not all the grieving fathers are best pleased with Devlin's investigations. A poem by John Donne provides a clue about the objects, but Devlin makes real progress only when he discovers that all the families were connected by the grim voyage of the Harmony, whose officers and passengers were left to starve when the crew mutinied. Realizing that the fathers would rather see their sons die than reveal their secret, Devlin wonders if the mutiny ended in cannibalism. Adding to his trials are ongoing problems with his lover, former French spy and actress Kat Boleyn, who still refuses to marry him. Powerful Lord Jarvis, whose son died on the doomed ship, is trying to force Kat to reveal the identity of the French spymaster. As Devlin travels from the drawing rooms of the rich to the squalid streets of London and England's bucolic backwaters, he uncovers shocking secrets that will change his life forever.
Harris's third Regency mystery (When Gods Die, 2006, etc.), suspenseful and meticulously researched, should garner this excellent series more devoted fans.
—Kirkus Reviews