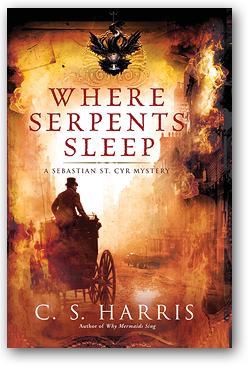 The girl stared out the window, one hand sliding up and down her shawl-covered arm in a ceaseless, uneasy motion. Outside, a thick fog leached the light from the dying day and muffled the sounds of the surrounding city.

"You don't like the fog, do you?" Hero Jarvis asked, watching her.

They sat together in a pool of golden light thrown by the lamp on the plain tea table where Hero had laid out her notebook, pen and ink, and the standard list of questions she'd drawn up to ask. The girl jerked her gaze back to Hero's face. This one was older than some of the other prostitutes Hero had interviewed, but still young, her face still smooth, her skin clear, her green eyes sharp with intelligence. She said her name was Anne Jones, although in Hero's experience women in this business seldom gave their true names.

"Who does like fog?" said Anne Jones. "You can never tell what's out there."

The girl's accent was disconcerting: pure Mayfair, without a trace of Cockney or any country inflection. Studying the girl's fine bone structure and graceful bearing, Hero knew a flicker of interest mingled with something both more personal and less admirable that she didn't care to examine too closely. How had this girl—surely no more than eighteen or nineteen years old and so obviously gently born and bred—ended up here, at the Magdalene House, a refuge run by the Society of Friends for women who wished to leave prostitution?

Reaching for her pen, Hero dipped the tip into her inkwell and asked, "How long have you been in the business?"

A bitter smile touched Anne Jones's lips. "You mean, how long have I been a whore? Less than a year."

It was said to shock. But Hero Jarvis was not the kind of woman who shocked easily. At twenty-five years of age, she considered herself immune to the excesses of sensibility that afflicted so many of her sex. She simply nodded and went on to her next question. "What sort of work did you do before?"

"Before? I didn't do anything before."

"You lived with your family?"

Anne Jones tipped her head to one side, her gaze assessing Hero in a way she did not like. "Why are you here, asking us these questions?"

"It is my belief that most women enter prostitution not because of some innate moral weakness but out of economic necessity."

A quiver of emotion crossed Anne's face, her voice coming out harsh. "What do you know about it? A woman like you?"

Hero set aside her pen and met Anne's gaze without flinching. "Are we so different?"

Anne Jones didn't answer. In the silence that followed, Hero could hear the voices of the other women drifting up from downstairs, the clink of cutlery, a quick burst of laughter. It grew late; soon Hero's carriage would return to take her back to Berkeley Square, to the safety and comfort of her privileged world. Perhaps Anne Jones was right, in a sense. Perhaps-

The sound of a fist pounding on the front door below reverberated through the house. Hero heard a woman's startled exclamation, mingled with a man's throaty growl. A cry of outrage turned suddenly to a scream of terror.

Anne leapt from her chair, her eyes wild. "Oh, God. They've found me."

Hero pushed to her feet. "What do you mean? What's happening?"

She could hear the voices of more men now, the crash of overturned furniture, the smashing of crockery. Women shrieked. Someone pleaded, tearful, her voice trailing off into a whimper that ended abruptly.

"They're here to kill me." Anne Jones whirled around, her gaze sweeping the room to fix on an old walnut cupboard that took up most of the near wall. "We must hide."

From below came the sound of running feet and a woman's scream transformed, hideously, into a throaty gurgle. Anne yanked open the cupboard door. Hero reached out a hand, stopping her. "No, not the cupboard. That's the first place they'll look."

Crossing the room, Hero threw open the casement window that overlooked the mist-swirled alley below. The window opened onto the sloping roof of what was probably the kitchen or a washroom. "This way," said Hero. She sucked in a quick breath, the coal smoke tinged damp air biting her lungs as she threw one leg over the low sill and ducked her head through the frame.

Covered with moss and condensation and soot, the slate roof tiles felt treacherously slippery beneath the smooth leather soles of Hero's kid half-boots. She moved cautiously, one hand braced against the rough brick of the house wall as she turned to help Anne Jones through the narrow opening.

As she eased the window closed behind them, Hero heard a man shout from inside the house, "She's not here."

Another man answered, his voice lower pitched, his footsteps already heavy on the staircase. "She's here. She must be upstairs."

"They're coming," Hero whispered, and felt Anne's hand tighten around her upper arm in warning.

Following the direction of the girl's shaky, pointing finger, Hero discerned the figure of a man looming out of the fog below. A guard, stationed at the backdoor to make certain none of the women in the house escaped to the alley.

Hunkering low, Hero crab walked down the slippery slope of the roof to its edge. She watched the man below pace back and forth, his hat pulled over his eyes, his shoulders hunched against the dampness.

Moving as silently as she could, Hero swung her feet over the edge, her stalkinged legs showing creamy white against the white of the mist as the hem of her fine blue alpaca walking dress caught on the edge of the tiles and hiked up. She waited until the guard paused just below her. Then she pushed off from the eaves to drop straight down on him.

The force of the impact knocked him to his knees with a grunt and threw Hero to one side. She landed on her hip in the mud, hard enough to bring a small cry to her lips, but she scrambled quickly to her feet. The man was still on his hands and knees when Hero's heel caught him hard on the side of his head and sent him staggering back against the house wall to land in a slumped heap. He lay still.

Anne Jones slid over the edge of the roof to come down in a rush of tearing petticoats and scraped skin. "Good heavens. Where did you learn to do that?"

"I used to play with my brother."

The sound of the upstairs window being thrown open brought both their heads up. A man's voice cut through the fog. "Drummond? You there?"

The alleyway was a sea of mud and ancient, half-buried cobbles hemmed in by soaring walls of soot-blackened brick. Breathing hard, her fingers gripping the other woman's hand tightly, Hero sprinted toward the square patch of white at the alley's mouth where the silhouette of a carriage appeared out of the mist. They had almost reached the footpath when Hero heard the boom of a gun behind them. Beside her, Anne Jones faltered.

Turning, Hero caught the girl as she began to crumple. The bullet had torn a gaping, oozing hole through her chest.

The boom of a second shot echoed up the alleyway. Hero imagined she could feel its passing like the whisper of a ghost beside her cheek.

"I'm sorry," she said, sobbing slightly as she eased Anne down into the mud and ran on.

Return to Where Serpents Sleep