A Conversation with C. S. Harris On When Falcons Fall 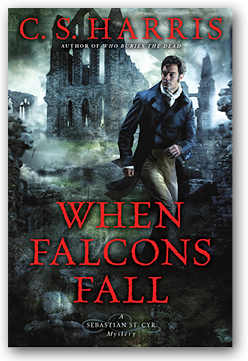 Candice Proctor is the woman behind the pseudonym C. S. Harris. Candice, When Falcons Fall is the eleventh book in the Sebastian St. Cyr mystery series, which you've been writing now for more than a decade. Can you think back to what originally inspired the series? Was there a particular spark of an idea for this new book? I wrote seven historical adventure-romances before I decided to move to historical mysteries, and I was fortunate to be given a great deal of freedom with them, particularly with the settings that ranged from medieval France and nineteenth-century America to Colonial Australia and the Victorian-era South Pacific. But eventually I came under increasing pressure to "pick a time and place and stick with it." I decided that if I had to stick to writing about one time and place, I'd rather do it by following a cast of characters through the twists and turns of their lives in a historical mystery series. I toyed with several other settings for a series—namely medieval England and nineteenth-century America—and developed casts of characters for each. But it was the story of Sebastian and his loves, friends, family, and enemies that really grabbed my imagination and wouldn't let go.

You've written other kinds of fiction under various names. Why did you decide to choose a new pseudonym for this series and are there any secrets behind your choice? There was concern that some of my historical romance readers would be disappointed if they picked up a "Candice Proctor" novel and found themselves reading a historical mystery. My romances always featured a hefty chunk of action, adventure, and violence, and there are several love stories in my mystery series, so I'm not convinced the concerns were valid. But it was considered best. I chose the pseudonym "Harris" because it is my husband's last name, and "C.S." simply because "C.E. Harris" (my middle name is Elizabeth) didn't sound right to my ear.

I've so enjoyed seeing Sebastian and Hero's relationship evolve over the course of the series. Did you have it in mind from the start, or did it change as you wrote the books? I did know before I ever started writing the first book in the series, What Angels Fear, that I wanted Sebastian to end up married to Hero. I love Kat as a character, but fiction requires conflict, and the conflict between Kat and Sebastian would have worn thin over the course of the series. Plus, as a historian, I knew that as deep and real as their love was, the realities of their age would have made any marriage between them destructive. But beyond that, I was intrigued by the opportunity to follow a character who loses the love of his life and show that, yes, one can learn to love again, deeply and rewardingly. And Hero is such a wonderful character. She saves Sebastian when he's in a dangerous downward spiral, but in many ways he also saves her. Hero is very much her father's daughter and without Sebastian in her life, some of the traits she shares with Jarvis would, in time, have been accentuated in unfortunate ways. So they are good for each other. And yet, Jarvis is always there in the background, which means the potential for Hero to be faced with conflicting loyalties is very real.

When Falcons Fall is the first book in the series set entirely outside London. Did you enjoy the new location as much as I did? I really did. It made a fascinating change in the entire dynamic. In When Falcons Fall, Sebastian and Hero are outsiders in a dangerous place with lots of secrets they only gradually uncover. They lack much of the support system that is there for them in London, and as a result they must rely on each other more than ever. Plus, I found exploring the realities of English village life in the wake of the Enclosure Movement fascinating.

I had no idea that the Enclosure Laws had such a profound effect on the British countryside. Can you tell us more about that? We hear a great deal about the clearances in the Highlands, which came earlier and were more violent. But the Enclosure Movement of the 18th and 19th centuries had a tremendous effect on England's countryside and villages, and was responsible for much of the increase in the number of poor flooding into the cities or immigrating to America. I think we don't hear about it as much because it was so piecemeal—each big landowner pushed his own bill through Parliament, so it happened over decades. Yet it was a very real human and cultural disaster. The English countryside we see today is very much a product of the disruptions of those years. Entire villages simply disappeared.

I found Emma Chance as she is revealed through Sebastian's investigation an enormously sympathetic figure. How typical would her experience have been for a woman born out of wedlock in England during the early 19th century? Emma was fortunate in that she was given an education, whereas so many such children were simply dumped on the parish or given to farm families. An appalling number didn't even survive. But some of the so-called "parlour borders" of the time did indeed have Emma's background; there is one such character in Jane Austen's novel Emma, for instance.

How strange that Lucien Bonaparte lived in England while Britain was fighting a major war against his brother Napoleon on the Continent. Was it common for England to harbor close relatives of its most hated political enemies? Well, I certainly thought it was bizarre when I first stumbled upon his presence in England, which is why I knew I had to include him in one of my mysteries (and fortunately, by a delicious twist of fate, he was in the right area). It's fairly well known that a number of French refugees such as Marie Antoinette's daughter fled to Britain during the Revolution, but a captured brother of Napoleon is something very different. I found it fascinating that he was actually sought out socially by the noble families in the area—and allowed so much freedom. The concept of a gentleman's word of honor being sacred is very foreign to us today.

In previous books Sebastian and Hero have encountered Marie Antoinette's daughter and Jane Austen—my personal favorite. Will they meet other historical figures in future titles? I've always made it a point whenever possible to tie the books in this series to real historical events happening at the time. Probably because of my background as a historian, I wouldn't feel comfortable making a historical figure the protagonist in a series, but I do enjoy including historical figures in my books as secondary characters. I make a real effort to be as true to them as possible, whether it's William Franklin or the Hope brothers or Spencer Percival. The years coming up—1814 and 1815—were so very critical in Britain's history, so yes, we will be meeting well known historical figures in the books to come.

You have a Ph.D. in history. How does your academic background influence your research and writing process? I suspect the greatest gift my historical training has given me as a novel writer is a strong understanding of both the sweep and the subtle nuances of British and European history. And by that I mean not simply political and military events and personalities, but also the important influence of developments in philosophy, the arts, and the sciences. It's that zeitgeist of a period that can be so difficult to grasp since it requires a familiarity with far more than, say, England in the early 19th century. In order to really understand their characters, historical novelists need to be familiar with what came before their books begin--particularly the decades their characters and their characters' parents lived through. Think about the way the lives of baby boomers were influenced by the fact that their parents experienced the Great Depression and World War II; any future historical novelist writing about the late 20th century will need to take that into consideration.

As a historian, my specialty is the social and cultural history of the period from 1750 to 1850. Sebastian and Hero's ideas about racial and gender equality were certainly rare for their time, as evidenced by the reactions of Jarvis, Hendon, and even Tom. But they weren't unheard of, and that tension between the future and the past is one of the things I enjoy about the series. Of course, being a historian doesn't relieve me of the need to do a ton of research for each book, on everything from, say, exactly how the inquest system worked in 1813, to the personalities and intimate biographies of historical figures such as Lucien Bonaparte and Jane Austen. And unfortunately, I still make mistakes. It's inevitable.

Readers are drawn to new books in the series partly to discover more about Sebastian's true parentage, which you are revealing very slowly—for some readers, excruciatingly so. Will readers be put out of their exquisite misery any time soon, and learn the full truth of Sebastian's origins? Oh, yes; I do intend to reveal Sebastian's true parentage. In fact, I have his family tree worked out back to the early seventeenth century! Sebastian will also discover exactly what happened to his mother. But I must admit he still has some pain to go through before we get there—as does Hero.