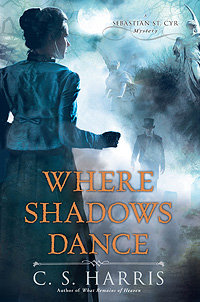 Regency London: July 1812. How do you set about solving a murder no one can reveal has been committed?

That's the challenge confronting C.S. Harris's aristocratic soldier-turned-sleuth Sebastian St. Cyr when his friend, surgeon and "anatomist" Paul Gibson, illegally buys the cadaver of a young man from London's infamous body snatchers. A rising star at the Foreign Office, Mr. Alexander Ross was reported to have died of a weak heart. But when Gibson discovers a stiletto wound at the base of Ross's skull, he can turn only to Sebastian for help in catching the killer.

Described by all who knew him as an amiable young man, Ross at first seems an unlikely candidate for murder. But as Sebastian's search takes him from the Queen's drawing rooms in St. James's Palace to the embassies of Russia, the United States, and the Turkish Empire, he plunges into a dangerous shadow land of diplomatic maneuvering and international intrigue, where truth is an elusive commodity and nothing is as it seems.

Meanwhile, Sebastian must confront the turmoil of his personal life. Hero Jarvis, daughter of his powerful nemesis Lord Jarvis, finally agrees to become his wife. But as their wedding approaches, Sebastian can't escape the growing realization that not only Lord Jarvis but Hero herself knows far more about the events surrounding Ross's death than they would have him believe.

Then a second body is found, badly decomposed but bearing the same fatal stiletto wound. And Sebastian must race to unmask a ruthless killer who is now threatening the life of his reluctant bride and their unborn child.

"I love this series. It has it all: romance, political intrigue, dark humor and memorable characters. I think new readers should start from the beginning however, because I wouldn't want them to miss a single line of what I consider to be a first quality series."
—Alice Logsdon, Historical Novels Review

"New Orleanian Candice Proctor, writing as C.S. Harris, brings the page-turning adventure, international intrigue and unlikely romance of Regency England to Where Shadows Dance, the sixth in her St. Cyr mystery series. This latest mystery also is spiced with a bit of muddy grave-digging and early (and smelly) autopsy science... I like the way Harris is moving with the series, especially with the multi-faceted Hero, herself an iconoclast who can move through drawing rooms and set up social service enterprises—but can be awfully handy with a knife when the need arises."
—Times-Picayune (New Orleans) (read the full review)

TRAILER FOR WHERE SHADOWS DANCE: